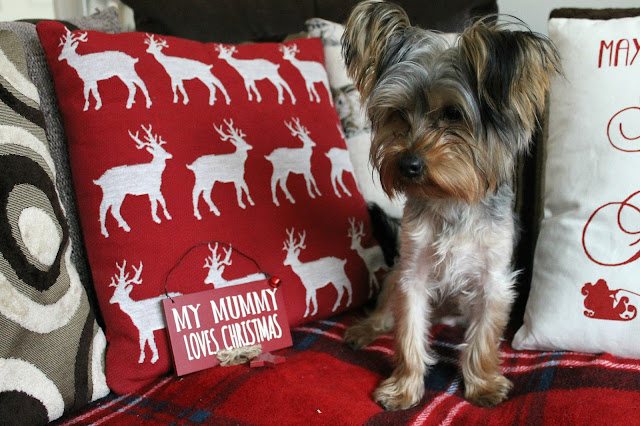 Archie's right, his Mummy does indeed love Christmas. This year I've decided to, sort of, do Blogmas! At the moment I'm planning to write a blog post every day, but on alternate blogs (for those who don't know, I have a neglected craft blog, which you can find here.) So one day I'll post here, and one day I'll post there... so on and so forth. I thought this would be the best way to do things, as it gives me free days to add in any posts that I spontaneously want to write, fitting them in around the ones I've already pre-planned. I hope this all makes sense! 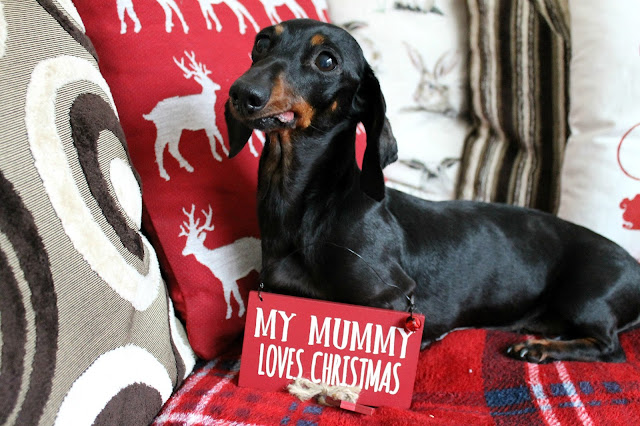 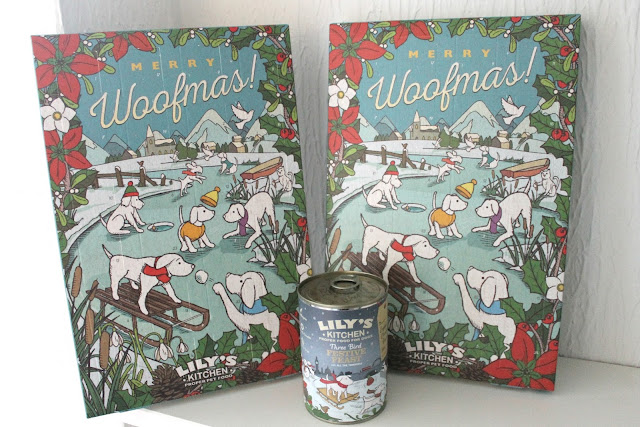 As you can see, the dogs have got their advent calendars and Christmas dinner from Lily's Kitchen, and we're so ready for December! As for the blog, I've got a few gift guides, winter essentials, christmas photoshoots and lots of other festive fun planned, I really hope you'll join me along the way. I'm also doing Vlogmas on my youtube channel, so you can see more of the dogs there! 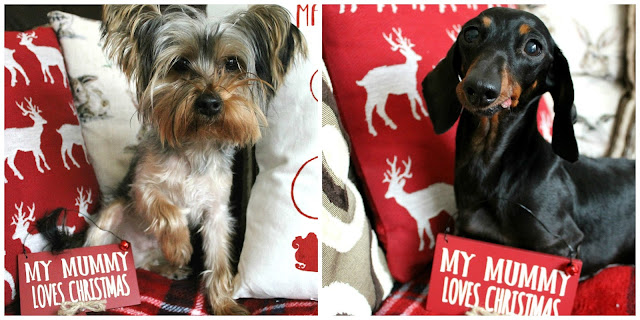 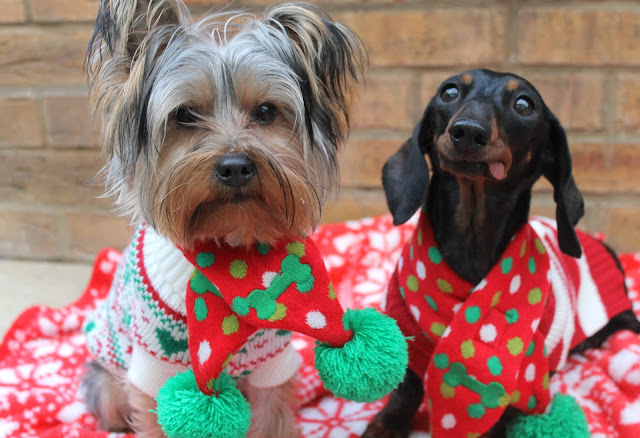 Welcome to our first Christmas gift guide of the season! We've decided to start with the luxurious; things I'd love to gift the doggies in my life, if only I could. These items are all absolutely stunning, I've seen a few in person and they're just beautiful. 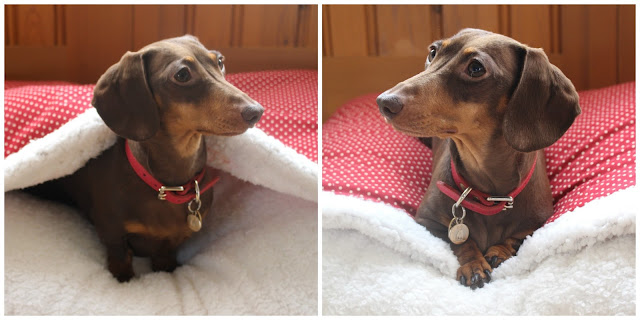 (Photos borrowed from the wonderful Fachshund, with permission of course!)

I've been following Slumbering Hound for a while, but recently my friend Jaime posted about Lily's beautiful new snuggle bed, and it's now top of my Christmas wishlist! Our rehomed daxie Winnie went from very overweight to slightly underweight at quite a rapid pace, and the poor girl really feels the cold. (Don't worry, she's been vet-checked; her body just wasn't prepared for good food and long walks when we rescued her, so she dropped the weight quicker than any of us expected!) She spends her days snuggled up in her donut bed, in her equafleece, or buried under a blanket... I just know that she'd absolutely adore one of these beds. They look to be beautifully made, and so lovely and warm. They can even be personalised; what a wonderful gift that would make for your pooch! 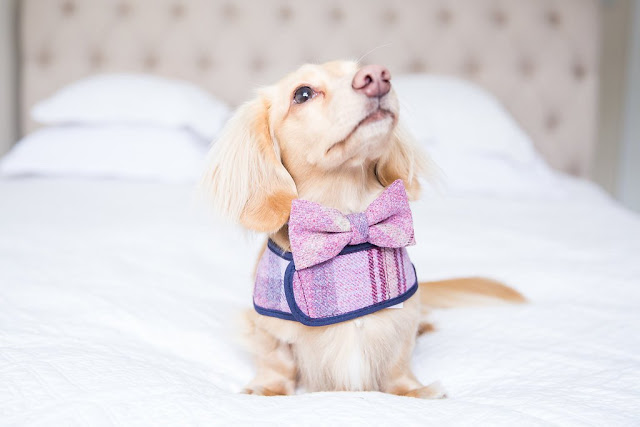 Ohhhh Teddy Maximus, how I love you. Archie has a bow tie from Teddy Maximus which is just adorable, and I've always drooled over the coats and beds, but they've recently started selling the most beautiful harnesses. This specific style of harness, with a stomach strap and chest strap, is the style that fits Winnie perfectly, and so this gorgeous Pink Shetland Wool offering just had to be featured in this post. Doesn't Teddy model it beautifully for their website? I'd just die of happiness if I got my mitts on one of these beauties. 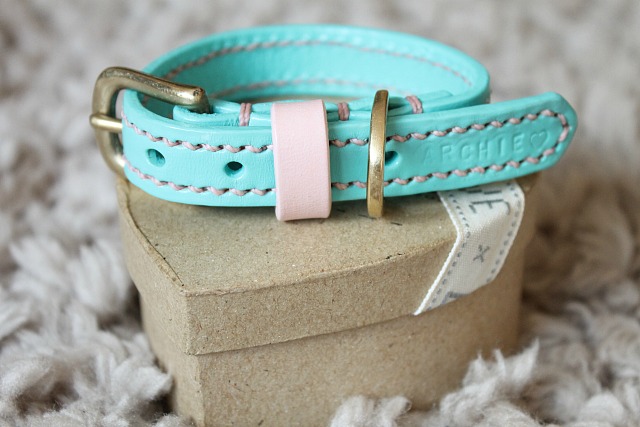 Next we have one of our firm favourites, Broughton & Co. They not only make the most amazing collars and leads, but you can also get engraved love lock ID tags, dog scarves and gifts for humans too! They are just the epitome of luxury, gorgeous leather, exquisite stitching, hand-stamped personalisation and adorable packaging to boot. These collars are most definitely made to last, and I'm determined to get one for Winnie at some point. 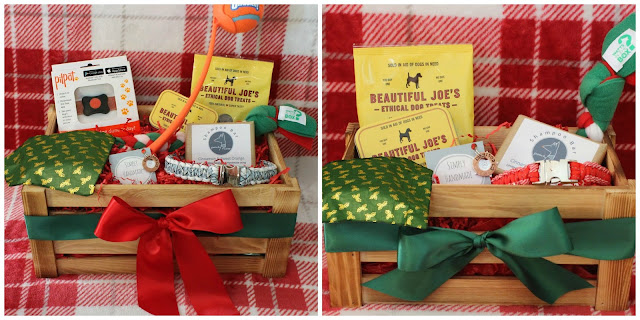 Just look at these hampers! Devil Dood Designs released their Christmas hampers a few days ago, and they're absolutely jam-packed with goodies. I particularly love the exclusive festive collars, and the Simply Handmade Tags ID tags. The hampers come in a variety of options; Ultimate and Mini first of all, and then you can purchase a hamper with goodies for 2 or 3-dog households! They look to be incredible value for money, and it's definitely one of, if not the best, hamper we've seen released this year.

So there you have it, our luxury Christmas gift guide. Don't forget to pop back and see the rest of our festive posts and gift guides, starting tomorrow! 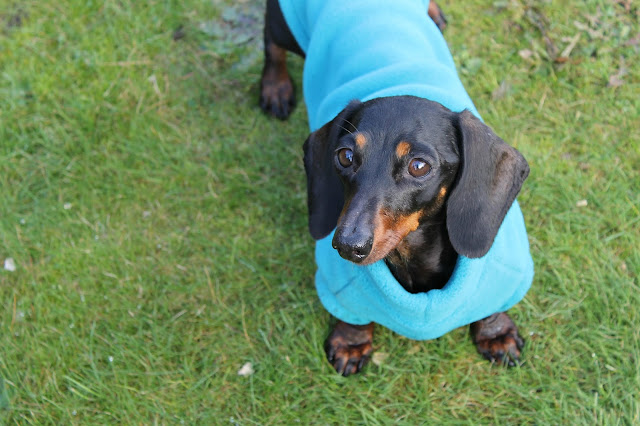 I have lots of festive posts planned for the next month, but I thought I'd also start a little mini series to share some of our winter essentials. First up is Winnie's Equafleece, which arrived a few weeks ago and has been a complete godsend!

I'd never heard of Equafleece until I got a dachshund; Archie has lots of jumpers and fleeces from various places, but I'd never come across this particular company before. Lots of owners were posting about them in the daxie facebook groups, as dachshunds are notorious for hating cold weather... people were looking for a product that would keep their babies cosy! I decided to give one a go as it's been nigh on impossible to find jumpers that fit Winnie properly, and I'm so glad I did. 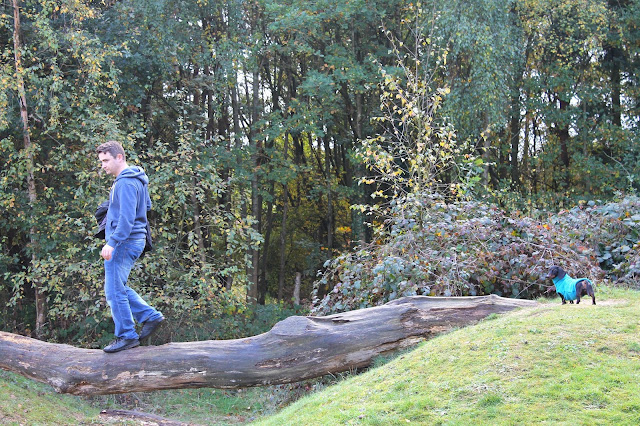 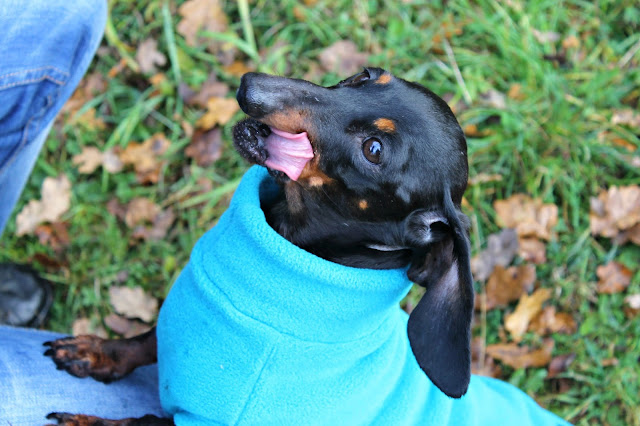 Once I had Winnie's measurements (the most important one is the measurement from breastbone to base of tail) I found the website really easy to use. I went for an 18-20 inch slim dachsie jumper, as Win is very long and very thin! Length-wise it's perfect, and I love that her legs can't get stuck inside the jumper... believe me, this happens every time I try to put any other kind of jumper on her. It's been perfect for our recent wintry walks, but with daxies being so sensitive to the cold I know it'll be used all year round. 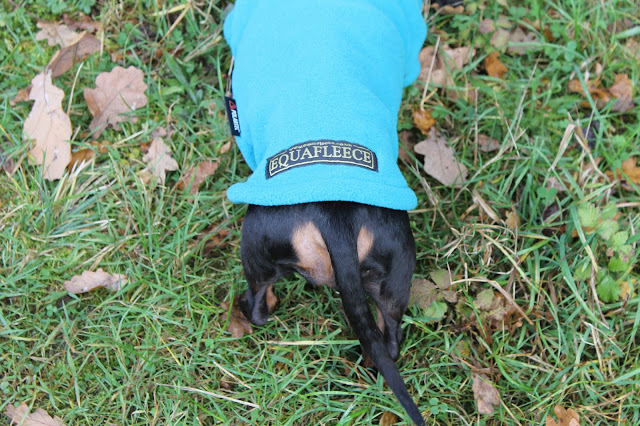 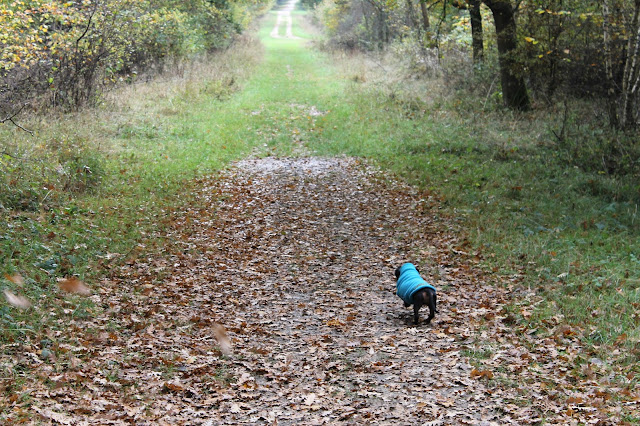 I love it so much that I think I'm going to get a couple more; I'd really like a mulberry one next, and maybe a red one for little Archie pup.

What are your winter essentials? We can't wait to share more of ours with you.

An Update on Winnie! | 3 Months in her Forever Home 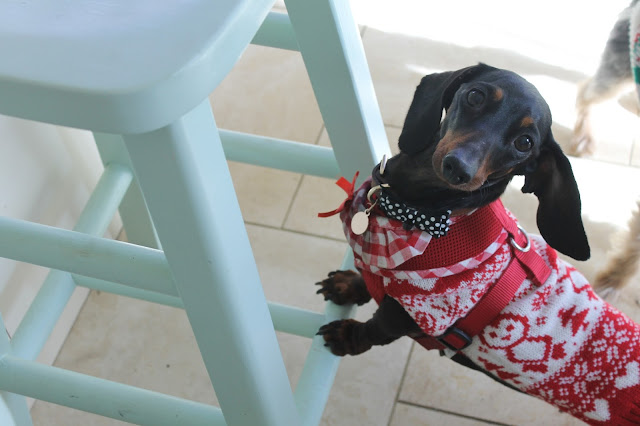 A side note before we start... the photos in this post are completely irrelevant; they're just super cute photos of my two with my parents' cocker spaniel, and I wanted to use them!

I thought it might be nice to write a little update post on Winnie today. You see photos of her on the blog and on instagram, but I haven't really gone into detail about her health or behaviour since my "Archie has a Sister!" post. We've had Winnie for three months now (feels like forever!) so I thought you were over-due a little update.

If you read my first post about Winnie, you'll know that she was a little dog with some biiiiiig issues. She had all her teeth removed the same week that we got her, but thankfully, she recovered very quickly. You'd never know that she has no teeth! She eats like a champ, and the only time I really notice it is when she tries to pick up and carry around a toy... it's a bit difficult with just gums, bless her. Sadly, her teeth weren't her only issue when she came to us. She was vastly overweight (even though lots of people tried to tell me otherwise! I can assure you, a miniature dachshund should not weigh almost 8kg) and she also had some hair loss. Her weight is now totally under control! She's 5.2kg and looks so much better, as well as being far more energetic and active. Good food and daily walks have done wonders for her, and now that she's spayed, her hair loss is the only health issue we're trying to combat. Hopefully, an upcoming vet visit can shed some light on the cause of it. 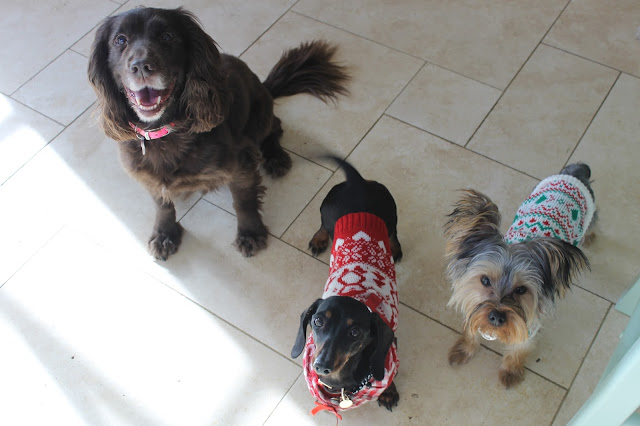 Perhaps her most serious issue was a psychological one; her fear of other dogs. Winnie still absolutely hates other dogs, unless she's met them many times (like my parents' cocker, Ruby, pictured above) or they're a fellow dachshund. It took a good few weeks for her to really accept Archie, and I'd say it's only in the last 6 weeks or so that they've become "friends". They pal around together most of the time now, and I often find them snuggled up together. Even when she's spent lots of time with a different dog though, any little thing can spook her, and the barking and snapping will start. She regularly barks at my parents' dogs, especially if they try to play fight with Archie! As she has no teeth, she herself can't do any damage, but that doesn't mean another dog won't harm her if she starts growling. I've found that going on a walk is the best way to introduce Win to another dog, and we've made a little best friend, Bernie the daxie, who lives locally to us. We try and go on at least one walk together a week, and I truly think it's helped with Winnie's issues. Unfortunately, it's now Archie who does most of the barking at other dogs! 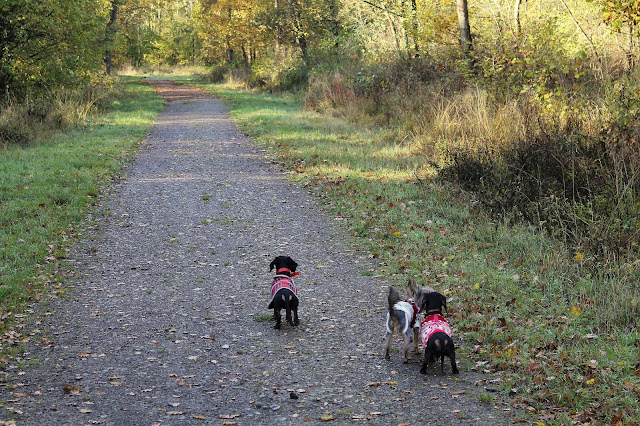 The only other thing we're trying to work on with Winnie is her housetraining; she was doing pretty well by the end of the summer, but when the bad weather hit and I went back to work, it all went out of the window and she won't even use puppy pads now! I'm finding that an early morning dog walk and forced regular trips out to the garden are helping somewhat, so I'm sure we'll get back into a routine soon.

So there you have it! A little update on Winnie. She still has some issues, and goodness knows she's brought out some bad habits in Archie, but I love her dearly. I'm so glad we took her on, and I can't wait for you to see some of the Christmas themed photos I've already taken of her for Blogmas!

I hope you're all well,

(PS; Dogs are wearing jumpers by B&M and Home Bargains, Bernie's tartan coat is from The Range, Winnie's collar is from Duke Loves Fergie and her harness is from Wagytail.)

Posted by Chloé Murray at 09:15 No comments:

We Love You, Autumn. 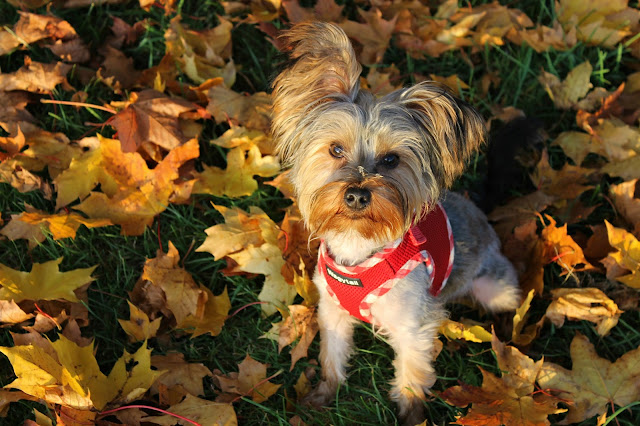 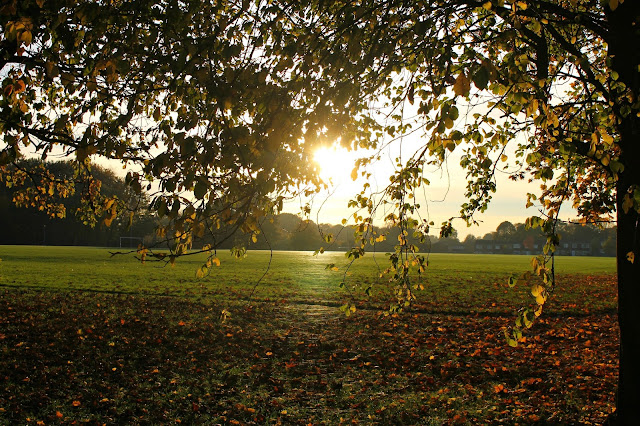 Hello all!
Anyone who knows me, will be aware that Autumn and Winter are undoubtedly my favourite times of year. I love the dark, cold evenings (even though they make blog photos and videos for my youtube channel nigh on impossible!) I adore Christmas, and more than anything... I love bundling up in a coat and scarf and getting out with the dogs.

On Halloween, the doggies and I ventured to the field opposite our house for a little late afternoon run. It's our usual afternoon walking spot, however on this day, it just looked beautiful. The leaves were crisp and orange, the sunset was glorious, and the dogs were obliging photography models. I just really wanted to share a few of my photos with you! Both dogs are wearing harnesses from Wagytail. 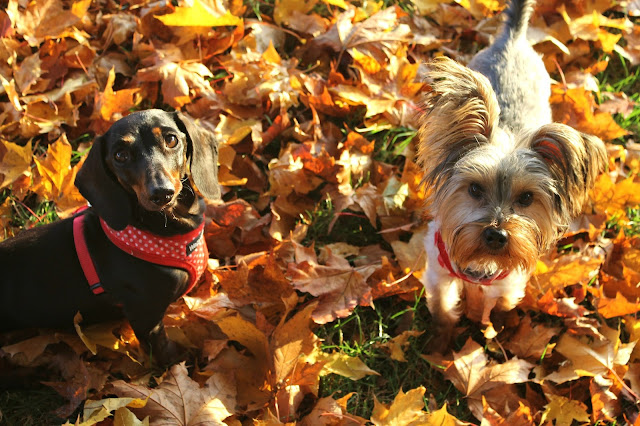 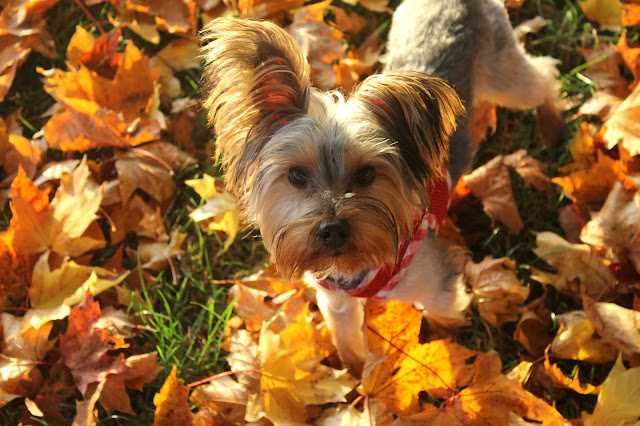 The next day, however, November hit with a vengeance and the field was a soggy mess! Even the drizzle didn't stop us enjoying our walk though, I just wrapped the dogs up in some jumpers (both from Pets at Home) and off we went. 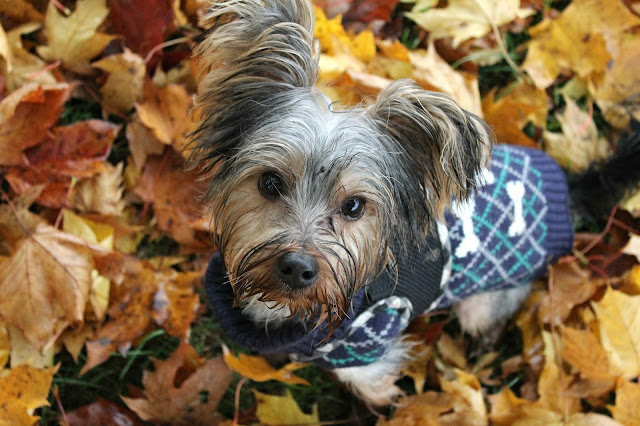 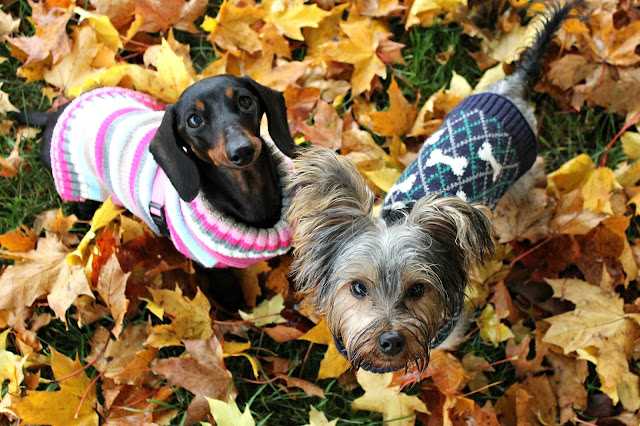 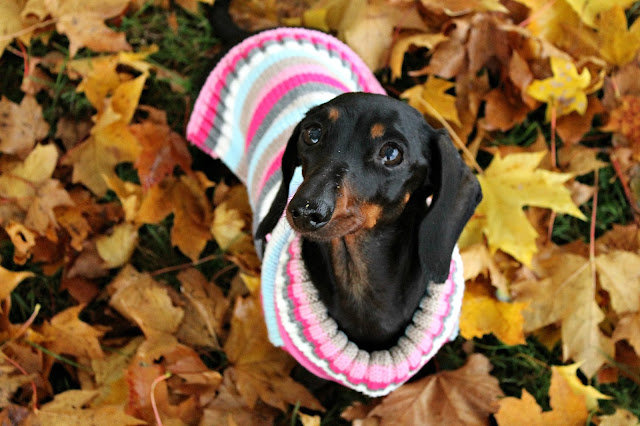 I love these little dogs, and I love that becoming a dog owner this year has made me a little bit fitter, a little bit healthier... and someone who actually loves to walk!

Are you enjoying Autumn?

Posted by Chloé Murray at 12:23 No comments: 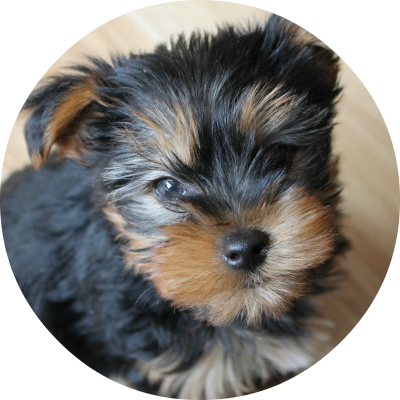